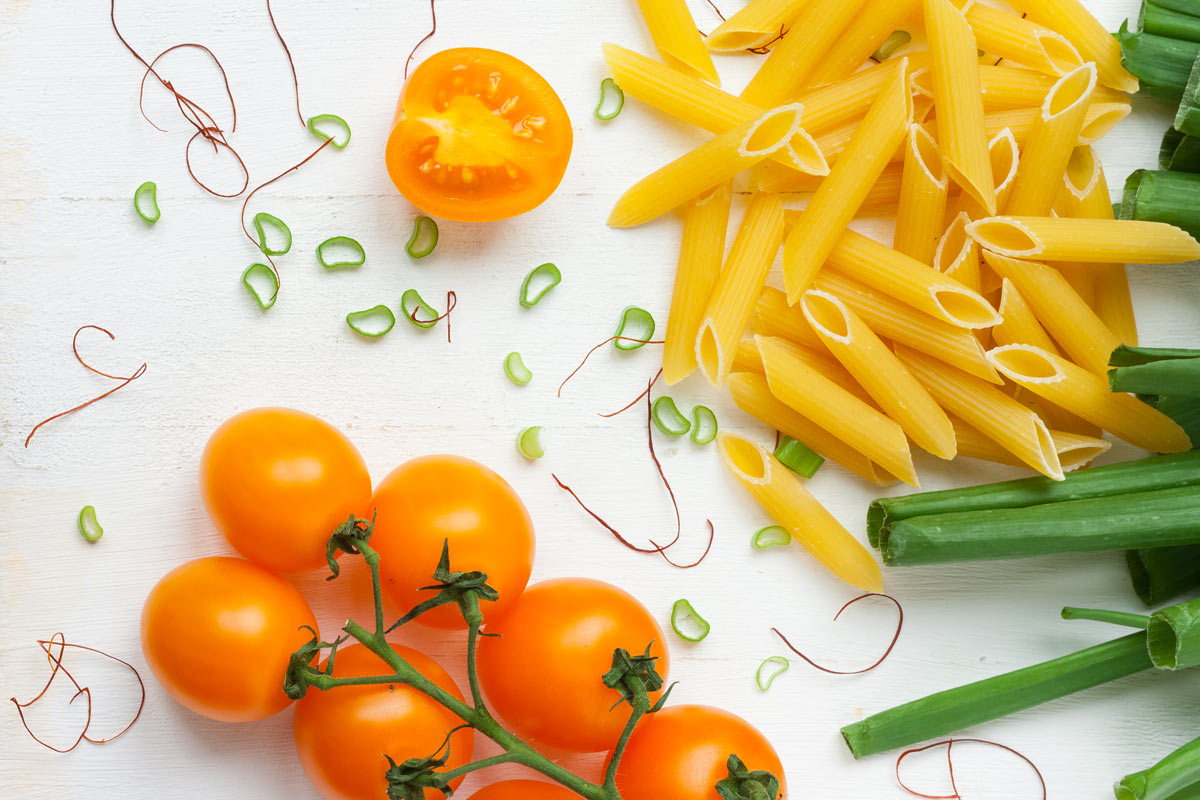 Penne with Warm Cherry Tomato Vinaigrette Recipe, Spotlight on Chives, Importance of Dedicated Kitchen Shears, Tapping Into Your Creativity and Why Use It or Lose It Is Real

Not every great tomato sauce needs hours of simmering! My warm cherry tomato vinaigrette does double duty—equally delicious over hot noodles and cold salads. And it takes less time to make than boiling the pasta. I’m also sharing the essentials on chives, a delicate yet underused herb, and the best way to chop them. You can also read about how to become more creative and why the exercise adage “use it or lose it” holds true.

Consider chives the mild-mannered relative in the allium family of onions, scallions, garlic, and more. Because their flavor is delicate and easily lost, they’re primarily added after any cooking has been done. But there are different types of chives, some more flavorful than others.

Common chives are the ones you’re most likely to find at the market. They have slender bright green and hollow stalks, sometimes with flowers attached, and their flavor is quite mild.

Chinese or garlic chives are deep green and have flat blades, with a stronger flavor very reminiscent of garlic. They, too, may have flowers attached.

Siberian or blue chives have exceptionally tall blades yet are almost as mild as common chives yet harder to find.

Experiment, and consider growing your own to have chives at your fingertips.

Why you need dedicated kitchen shears

For some kitchen tasks, shears actually work better than a knife, and that’s why you should have at least one pair in your tool drawer. According to the Academy of Nutrition and Dietetics’ Food & Nutrition Magazine, kitchen shears are different from scissors. The blade’s pivot point is farther from the handle, making the shears very strong, perfect for cutting up a whole chicken, for instance. The blades are usually longer and should be removable for easy cleaning, the same safety step you’d take after using a cutting board—but using shears means you may not need to dirty a cutting board as often.

Use shears to snip chives right over a dish, cut bacon into pieces, and even trim dough after you’ve lined a pie plate. Once you see how versatile they are, you’ll be tempted to buy a variety of shears—dedicated poultry shears, herb shears, and shears with offset blades for cutting at an angle. When possible, choose professional-grade carbon steel blades for durability and coated handles, including a large and oblong bottom handle, for the most comfortable grip.

For Your Best Health

Researchers at The Ohio State University (OSU) have developed a new method for helping people bring out their creativity by, in part, helping them think like kids again. It’s based on narrative theory and works by recognizing that we’re all innately creative. According to English professor and member of the OSU Project Narrative Angus Fletcher, PhD, who developed the narrative method of training for creativity, “We as a society radically undervalue the creativity of kids and many others because we are obsessed with the idea that some people are more creative than others. But the reality is that we’re just not training creativity in the right way.”

The method is an alternative to the standard creativity training technique called divergent thinking, which treats the brain as a logic machine, relies on data and information about the problems and successes of the past … and has less-than-optimal results, Dr. Fletcher says. “What it can’t do is help prepare people for new challenges that we know little about today. It can’t come up with truly original actions,” he says. “But the human brain’s narrative machinery can.”

His method draws on many of the techniques that writers use to create stories, such as developing new worlds in your mind, and perspective-shifting, which is thinking like another member of your work team, for instance. It’s not that the scenarios you dream up will actually happen, Dr. Fletcher says, explaining, “Creativity isn’t about guessing the future correctly. It’s about making yourself open to imagining radically different possibilities. When you do that, you can respond more quickly and nimbly to the changes that do occur.”

The creativity seen in young children is often unintentionally taught out of them by the time they get to middle school, where the focus is on logical, semantic, and memory training. The narrative approach to creativity can help people unlock the creativity they may have stopped using as they progressed through their education, Dr. Fletcher says.

He and Project Narrative’s Mike Benveniste have worked on the narrative method of training for creativity with the United States Army Command and General Staff College, the University of Chicago Booth School of Business, the OSU College of Engineering, and several Fortune 50 companies to teach creativity to their staffs and students. For a more formal evaluation, they’re conducting randomized controlled trials of the creativity curriculum on more than 600 US Army majors at the Command and General Staff College and working with new organizations, such as the Worthington Local School District in Ohio. “Teaching creativity is one of the most useful things you can do in the world, because it is just coming up with new solutions to solve problems,” he says. And you’re never too old to let your imagination run wild.

Why “use it or lose it” is real

Ever wonder why it seems that the less exercise you do, the harder it is to exercise at all? New research offers one possible explanation. Doing less exercise could deactivate the body’s vital Piezo1 protein, according to scientists from the UK’s University of Leeds. Piezo1 is a blood flow sensor. Deactivating it reduces the density of capillaries carrying blood to the muscles, and that restricted blood flow means activity becomes more difficult and can limit the amount of exercise you’re able to do.

The research, published in the Journal of Clinical Investigation, was carried out using mice, but because the Piezo1 protein is also found in people, the same results could occur. As lead author Fiona Bartoli, PhD, a postdoctoral researcher at Leeds’ School of Medicine, says, “Exercise protects against cardiovascular disease, diabetes, depression, and cancer. Unfortunately, many people fail to exercise enough, for reasons such as injury and computer usage. This puts people at more risk of disease. The less people exercise, the less fit they become, often leading to a downward spiral.

During the experiment, mice who had their Piezo1 levels disrupted for 10 weeks showed a dramatic reduction in activities like walking, climbing, and running on a wheel activity. Specifically they did fewer wheel revolutions per exercise session and had slower running speeds. The mice didn’t have less desire to exercise but rather less ability.

Adds David Beech, PhD, the study’s supervising author, “Our work sheds new light on how Piezo1’s role in blood vessels is connected to physical activity. A lot was already known about its role in blood vessel development, but far less was known about its contribution to vessel maintenance in adults. Our discovery also provides an opportunity to think about how loss of muscle function could be treated in new ways: If we activate Piezo1, it might help to maintain exercise capability.”

Get More Recipes In Your Inbox!