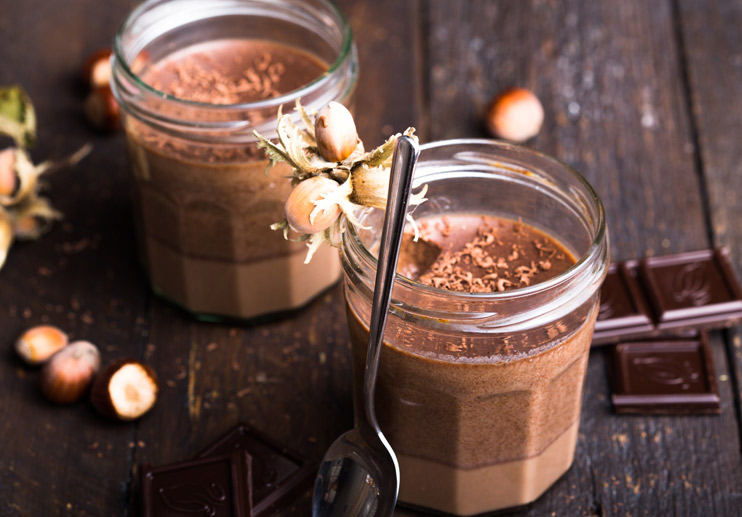 Miami chef and restaurateur Michael Schwartz (a friend of a friend) reports that this is one of his best-sellers. “(The) olive oil reinforces the richness of the cremosa,” he says.

In a saucepan, heat the cream with the granulated sugar until hot to the touch. In a bowl, whisk the egg yolks. Gradually whisk in 1 cup of the hot cream. Scrape the mixture into the saucepan and cook over moderate heat, whisking, until slightly thickened, 3 minutes. Remove from the heat. Add the chocolate and let it stand until melted, 5 minutes. Whisk until smooth. Transfer to a shallow bowl and refrigerate until very cold, at least 4 hours.

In a bowl, beat the cream with the confectioners’ sugar, espresso, and vanilla until firm. Spoon the cream into ten 1/2 cup ramekins and freeze until firm.

Preheat the oven to 350°F. Butter the bread on both sides. Toast on a baking sheet for about 8 minutes, or until golden.

Spoon the milk-chocolate cremosa onto plates, sprinkle with the hazelnuts, and drizzle with olive oil. Serve the espresso parfait and toast on the side.

Note: The cremosa can be refrigerated for up to 3 days; the espresso parfait can be frozen for up to 1 week.

Adapted from an article in Science Codex by the Temple University Health System, November 25, 2019

Boosting brain function is key to staving off the effects of aging. And if there was one thing every person should consider doing right now to keep their brain young, it is to add extra virgin olive oil (EVOO) to their diet, according to research by scientists at the Lewis Katz School of Medicine at Temple University (LKSOM).

In a new study in mice published online in the journal Aging Cell, LKSOM scientists show that yet another group of aging-related diseases can be added to that list—tauopathies, which are characterized by the gradual buildup of an abnormal form of a protein called tau in the brain. This process leads to a decline in mental function, or dementia. The findings are the first to suggest that EVOO can defend against a specific type of mental decline linked to tauopathy known as frontotemporal dementia.

Alzheimer’s disease is itself one form of dementia. It primarily affects the hippocampus—the memory storage center in the brain. Frontotemporal dementia affects the areas of the brain near the forehead and ears. Symptoms typically emerge between ages 40 and 65 and include changes in personality and behavior, difficulties with language and writing, and eventual deterioration of memory and ability to learn from prior experience.

Senior investigator Domenico Praticò, MD, describes the new work as supplying another piece in the story about EVOO’s ability to ward off cognitive decline and to protect the junctions where neurons come together to exchange information, which are known as synapses.

“The realization that EVOO can protect the brain against different forms of dementia gives us an opportunity to learn more about the mechanisms through which it acts to support brain health,” he said.

In previous work using a mouse model, in which animals were destined to develop Alzheimer’s disease, Dr. Praticò’s team showed that EVOO supplied in the diet protected young mice from memory and learning impairment as they aged. Most notably, when the researchers looked at brain tissue from mice fed EVOO,

they did not see features typical of cognitive decline, particularly amyloid plaques—sticky proteins that impair communication pathways between neurons in the brain. Rather, the animals’ brains looked normal.

Tau mice were put on a diet supplemented with EVOO at a young age, comparable to about age 30 or 40 in humans. Six months later, when mice were the equivalent of age 60 in humans, tauopathy-prone animals

experienced a 60 percent reduction in damaging tau deposits, compared to littermates that were not fed EVOO. Animals on the EVOO diet also performed better on memory and learning tests than animals deprived of EVOO.

Dr. Praticò and colleagues now plan to explore what happens when EVOO is fed to older animals that have begun to develop tau deposits and signs of cognitive decline, which more closely reflects the clinical scenario in humans. 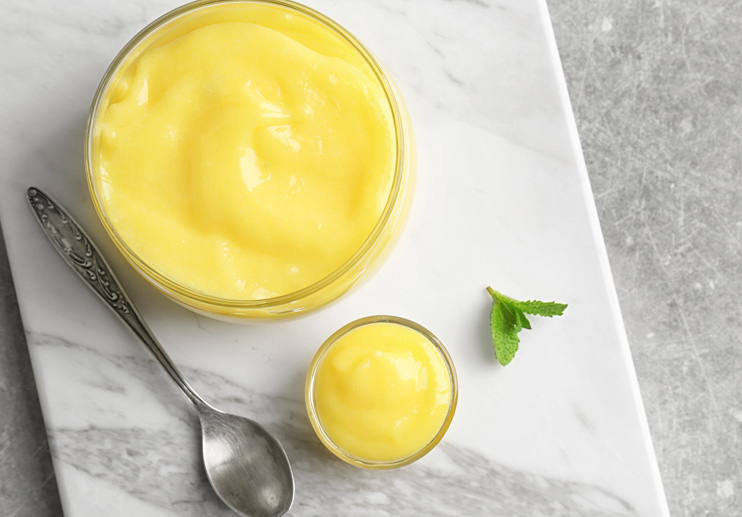 Luscious with the sweet/tart notes of Meyer lemon (a cross between a lemon and a mandarin orange), this soft custard is the perfect ending to a Mediterranean meal. If you can’t find Meyer lemons, substitute the juice and zest of regular lemons, blood oranges, or mandarin oranges.

Turn the blender on to its highest setting and process for 4 minutes.

While continuing to run on high speed, pour in the olive oil and blend for an additional 90 to 105 seconds until you can see the custard firming up on the sides.

Note: If you don’t have a high-speed blender, simply blend until smooth and frothy in step 2, stream in the olive oil with the motor running, then pour into a double boiler or bowl set over gently simmering water on the stovetop, stirring until it thickens up (it should reach 160°F for fully cooked eggs, or hold at 140°F for 3 1/2 minutes).

The custard can be refrigerated for up to three days or frozen for longer storage. When defrosted, it will return to the same creamy consistency as when fresh. 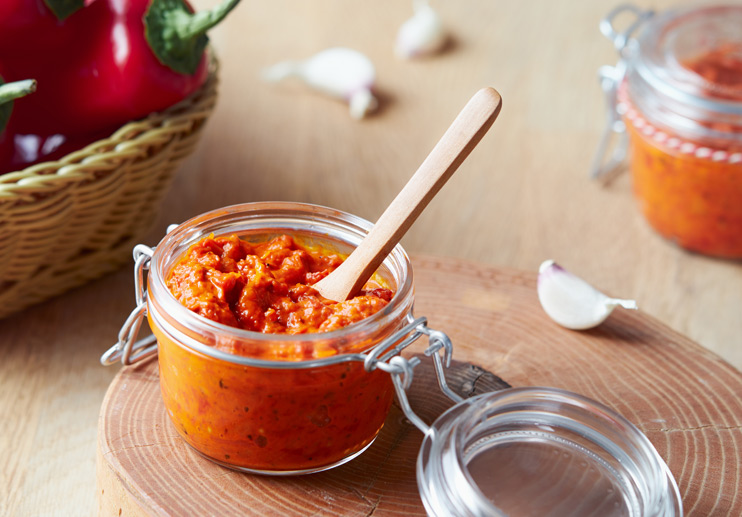 Romesco is one of Spain’s iconic sauces, good not only with grilled onions or leeks but also asparagus, broccoli, cauliflower, or brussels sprouts. You can even pair it with scrambled eggs or grilled meats, poultry, or seafood—it’s that versatile.

Preheat the grill to high. Quickly toast the chile on both sides (10 to 20 seconds in all). Transfer it to a bowl of warm water and let soak for several minutes while you grill the rest of the vegetables. Skewer the garlic on toothpicks. Skewer the onion quarters on bamboo skewers. Arrange the pepper, tomatoes, garlic, and onion on the grill grate and grill until the skin on the pepper is blackened and the other vegetables are nicely browned. As they are done, transfer them to a platter and let cool. Remove the toothpicks from the garlic and the skewers from the onions. Brush the bread on both sides with olive oil and grill until nicely browned, 1 to 2 minutes per side.

Drain the chile; reserve the liquid. Tear the chile into pieces and remove the stem and seeds. Remove any very charred skin from the tomatoes and pepper; core and seed the pepper. In the bowl of a food processor, combine the bell pepper, chile, onions, garlic, bread, and almonds. Puree to a smooth paste. Add the parsley, vinegar, the remaining olive oil, and salt and black pepper. Process until smooth, adding enough of the reserved chile soaking liquid to make a pourable sauce. Correct the seasoning, adding salt or vinegar as necessary.

Serve the sauce at room temperature; it will keep, tightly covered in the refrigerator, for up to 3 days.