And not only does it appear to be the secret to why olive oil is so heart-healthy, it might also be the key reason Mediterranean dieters live long, robust lives.

….Phenols contain biologically active compounds that are remarkably high in antioxidants. Olive oil phenols are most highly concentrated in extra virgin olive oil, which is made from cold-pressed olives—no heat or chemicals are used in refining.

Results of the Spanish study showed that the high-phenol extra virgin olive oil repressed the inflammatory activity of nearly 100 genes that play a key role in prompting inflammation.

In the journal BMC Genomics, the authors note that their results provide a likely explanation for the reduced risk of heart disease among those who follow a Mediterranean diet.

The Mediterranean diet is a pattern of eating that lately has become a darling of medical researchers. It includes vegetables and grains, not so much meat and, of course, generous portions of olive oil.

Mary Flynn, an associate professor of medicine at Brown University, says the evidence that olive oil is good for your heart has never been more clear. “Olive oil is a very healthy food. I consider it more medicine than food.”

She points to a big study published earlier this year in the New England Journal of Medicine where researchers in Spain had men and women in their 50s, 60s and 70s who were at risk of heart disease follow one of three diets. Some ate a low-fat diet, another group ate a Mediterranean diet with nuts. And a third group ate a Mediterranean diet that included almost four tablespoons of extravirgin olive oil per day.

“So, they could compare the three diets: Was it nuts, was it olive oil or was the low-fat diet beneficial?” says Flynn. And what researchers found was that a Mediterranean diet rich in olive oil cut the risk of heart attacks and strokes by 30 percent. The nut group, which was consuming olive oil as well, did well, too.

“The fact is, there are a huge range of benefits of real extra-virgin olive oil,” notes Tom Mueller, who has spent the last six years investigating and writing about olive oil. He says olive oil is good for two reasons: It’s mostly unsaturated fat, and extra-virgin oil, which is the highestgrade and least-processed form of olive oil, contains a whole range of other beneficial plant compounds called polyphenols.

But here’s the catch: Unfortunately, it turns out that more than half of the extra-virgin olive oil imported into the U.S. has been shown to be substandard. “The fact is, it’s quite often just very low-grade oil that doesn’t give you the taste or the health benefits that extra virgin should give you,” Mueller says. In fact, a study from the University of California, Davis, found that 69 percent of imports tested failed to meet a U.S. Department of Agriculture quality standard.

And Mueller says in some cases the oil is just too old. By the time imported olive oil reaches us, it has often been shipped from place to place and sometimes not stored well. Even if it’s not noticeably rancid, many of the heart-healthy compounds have degraded and fizzled. “Extra-virgin olive oil is fresh-squeezed juice—it’s a fruit juice—therefore freshness is a critical question,” he says. Mueller says the U.S. Food and Drug Administration used to police olive oil imports to ensure producers were meeting quality and freshness standards. But those efforts have fallen off.

So, where does that leave those of us who want to get our hands on the healthy stuff? Well, for starters, Mueller says look for brands that carry a harvest date on the bottle….

Oils with the highest levels of heart-healthy compounds tend to be pungent and peppery. Mueller says if the oil stings the back of your throat a little, that tells you the beneficial polyphenols really are there. “Once you have that taste, you get used to the bitterness and pungency, you never go back,” says Mueller. “It’s a completely different experience.” And a healthy one, too.

The following is excerpted from an article by Sara G. Miller that appeared in LiveScience on September 14, 2015.

The Mediterranean diet may be able to add “reduces risk of breast cancer” to its long list of health benefits, according to a new study from Spain.

In the study, researchers found that women who were asked to follow a Mediterranean diet that was high in extra-virgin olive oil were 68 percent less likely to develop breast cancer than those who were advised only to reduce the amount of fat in their diets.

In the study, 4,152 post-menopausal women who had never had breast cancer were asked to follow one of three diets: One was a Mediterranean diet rich in extra-virgin olive oil (extra-virgin olive oil accounted for 15 percent of their daily calories), the second was a Mediterranean diet rich in nuts, and the third was a control diet, in which the women were advised to reduce the amount of fat they ate.

After about five years, 35 women in the study had developed breast cancer. Women in the extra-virgin olive oil group were the least likely to develop breast cancer. The researchers also observed a slight decrease in risk for the women in the nut group, but this was not statistically significant (meaning it could have been due to chance), according to the study published today (Sept. 14) in JAMA Internal Medicine.

The Mediterranean diet contains many components that have been suggested to have antitumor effects, Dr. Miguel Martinez-Gonzalez, a professor of preventive medicine at the University of Navarra in Spain and coauthor of the study, told Live Science in an email.

However, the researchers do not know if the lower risk may have been lowered due to the extra-virgin olive oil on its own, or if it was the effect of oil working in combination with the rest of the diet, he said.

….Previous studies have also shown a reduced risk of breast cancer in women who eat a Mediterranean diet, Martinez-Gonzalez said.

A strength of the new study is that unlike those previous studies, in which women were asked to report what foods they ate, women in the new study were randomized to a specific diet, which eliminates certain factors that can influence the results, Dr. Mitchell Katz, a deputy editor of JAMA and the author of an editorial about the study, told Live Science.

The study did have limitations, including the small number of cases of breast cancer, and that all of the participants were white, post-menopausal women who were at risk of heart disease, Katz wrote in his editorial.

….Still, he encouraged women to try out the diet: “Although no diet is perfect, a Mediterranean diet [rich in] olive oil is likely good for your health,” Katz said.

Martinez-Gonzalez agreed. Women should be encouraged to eat more extra-virgin olive oil, salads with fresh vegetables and have fruit for dessert, he said. 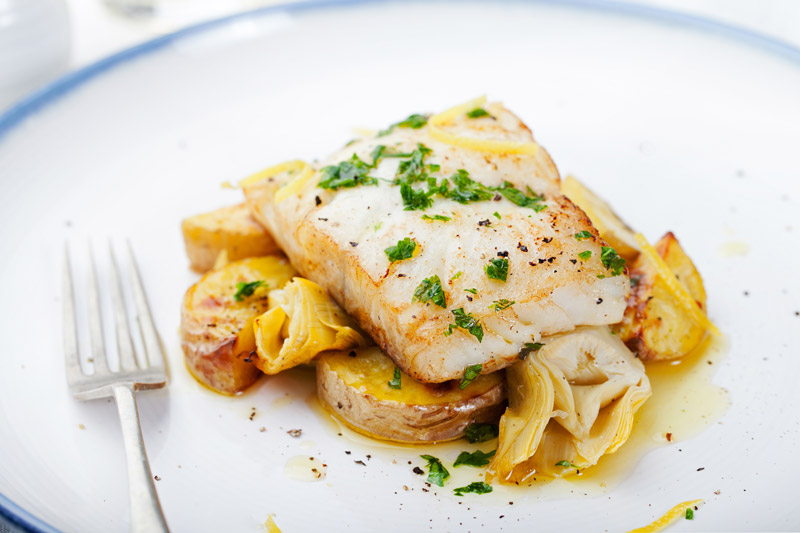 Many years ago, an olive oil producer’s elderly mother made lunch for us. I will never forget her caponata, which was similar to this one.

In a large, deep skillet, heat the 1/4 cup of olive oil until shimmering. Add the celery, onion, and garlic and cook over moderate heat until just softened, 4 minutes. Add the tomato sauce, wine, vinegar, artichokes, olives, pine nuts, sugar, and capers and season with salt and pepper. Simmer until the vegetables are tender and the liquid is reduced, 8 minutes. Stir in the basil and let the caponata cool.

Light a grill or preheat a grill pan. Rub the fish with olive oil and season with salt and pepper. Grill over moderately high heat, turning once, until cooked through, about 9 minutes. Transfer the fish to plates, top with the caponata, and serve.