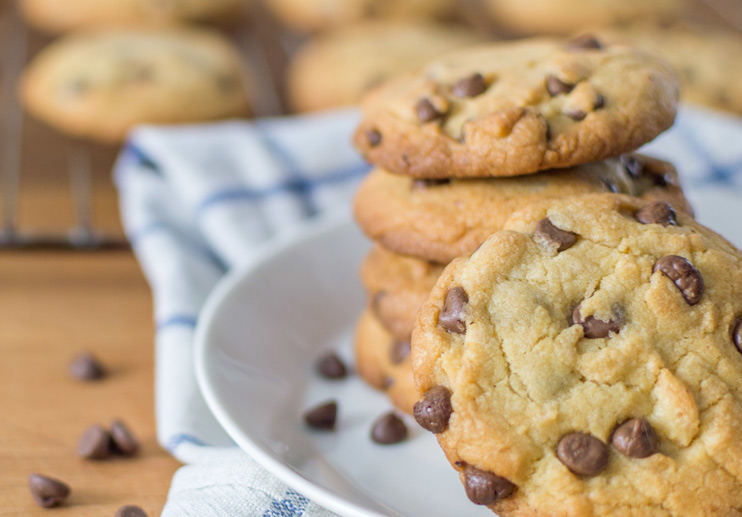 Well-known cookbook author Rozanne Gold shared this recipe on an episode of Martha Stewart’s Cooking Today on Sirius XM 110. These cookies’ oval shape, payload of olive oil, and the fact that they’re rolled in chocolate chips make them unusual and very professional looking (and tasting!).

Put the flour and sugar in the bowl of an electric mixer. In a separate bowl, whisk together the eggs, olive oil, and vanilla and almond extracts. Add the wet mixture to the flour mixture and mix until a smooth dough forms. The mixture will be slightly crumbly and a little oily. Knead several times on the counter. Form into 24 balls and then shape into small ovals that are 1 1/2 inches long and 3/4 inch wide. Roll the tops and sides in miniature chocolate chips.

Line a large rimmed baking sheet with parchment paper or a Silpat mat. Place the cookies 1 inch apart. Bake for 25 minutes, or until firm to the touch. Remove from the oven and let cool on the pan. Remove with a thin-bladed spatula. 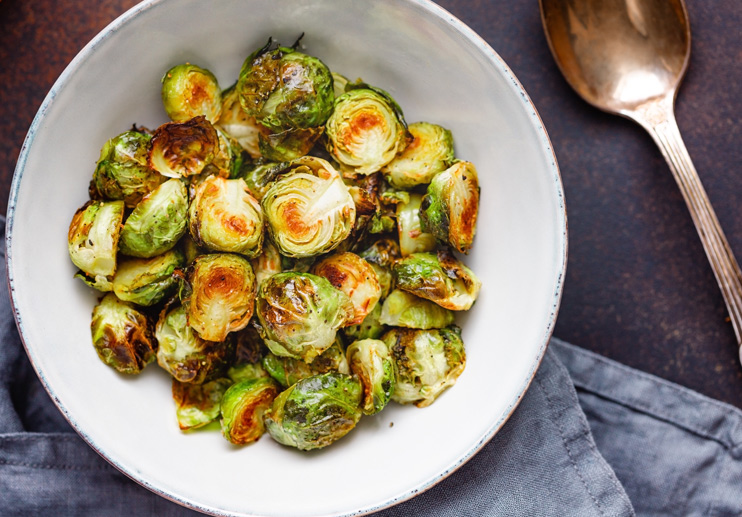 Roasted until golden brown and then doused in a flavorful vinaigrette, these brussels sprouts are addictive. If you can find them, buy brussels sprouts on the stalk. They are often available in farmers’ markets in the fall. Simply cut off what you need.

In a large bowl, toss the brussels sprouts with 2 tablespoons olive oil, then place them in a single layer on a rimmed baking sheet.

While the brussels sprouts are roasting, in a large bowl, whisk together the remaining 1/4 cup olive oil, the lemon juice, salt, pepper, garlic, and red pepper flakes to form a dressing.

When the brussels sprouts are roasted, toss them with the dressing. Transfer to a platter and serve hot. 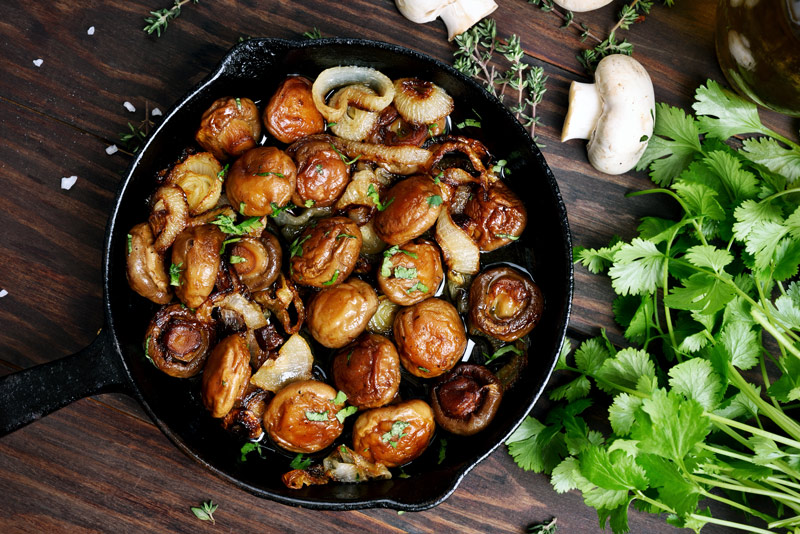 Melbourne has the largest population of Greeks of any city in the world outside of Greece. Originally discovered in an old monastery cookbook, this recipe is representative of many Greek dishes called lathero, meaning vegetables cooked with olive oil, tomato, and herbs. If you eat dairy, serve it with a briny chunk of feta cheese.

In a large pot add the olive oil and sauté the scallions at medium to low heat for about 2 minutes.

Add the mushrooms and leeks and a bit of salt, and continue sautéing for another 3 to 4 minutes.

Add the tomato and the tomato paste and stir, and then add just enough hot water to partially cover the vegetables.

Cover the pot and simmer (it should not be boiling) for about 30 to 35 minutes. It should not be watery. Remove from heat and let it cool to room temperature. Sprinkle with parsley and freshly ground black pepper.

Serves 4 as a side dish; 2 as a main course — Recipe adapted from olivetomato.com

Adapted from an article in the New Haven Register by Dr. David Katz, July 1, 2018

In late June 2018, Yale University hosted the Mediterranean Diet Roundtable conference. Among the presentations were two by world-leading experts in the bioactive components of olive oil, Eleni Melliou, PhD, and Prokopios Magiatis, PhD, both from the University of Athens.

Among those many compounds is oleocanthal, a polyphenol and potent antioxidant found in olives. It is established to inhibit COX1 and COX2 enzymes. What does that mean? The first, inhibition of COX1, is what ibuprofen does. The second, inhibition of COX2, is what Celebrex does. So, oleocanthal-rich olive oil (let’s call this “OROO”) has potent anti-inflammatory, and potentially analgesic (pain reducing) properties. What does the research show?

As presented by my colleagues from Athens, a study of OROO in 200 men in Spain showed a linear increase in protective HDL cholesterol, and a decline in LDL cholesterol. In a study of 24 women with hypertension, OROO was found to lower blood pressure, improve endothelial function and lower CRP, an important inflammatory marker. Multiple other studies cited by my Greek colleagues replicated these effects.

OROO has been shown to inhibit platelet aggregation as well, the mechanism responsible for acute myocardial infarction. Like ibuprofen, aspirin inhibits COX1, so there is a clear case for the actions of compounds in olive oil to resemble effects seen with these drugs.

Aspirin is used routinely as a cardioprotective agent because it inhibits platelet aggregation.

Oleocanthal derived from olive oil has been shown to induce the clearance of the plaques associated with Alzheimer’s disease from the brains of experimental animals. Results of a human trial, announced just last month, showed an improvement in Alzheimer’s symptoms, and delayed progression of the disease, with OROO.

Now, let’s put it all in context.

The above does not make the case that olive oil, or a Mediterranean diet, is required for good health. But the above certainly does make the case that genuinely good olive oil has genuinely good health effects. No surprise, then, that of the world’s five Blue Zone populations, two have OROO-rich, Mediterranean diets. That, too, is evidence that matters.

I find the weight of evidence regarding extra virgin olive oil, OROO, and oleocanthal extremely compelling. I am fully persuaded that “good” olive oil is a signature contributor to the many benefits of one of the world’s truly great diets.

I am also persuaded, however, again based on the full weight of relevant evidence, that no one food or nutrient accounts for the net effects of the overall diet. The one true toxin I see all too often in the mix—corrosive to consensus, understanding, common ground, and common cause—is cherry-picked science to make the case for any given diet. The pits are concentrated there, so be careful not to swallow that!