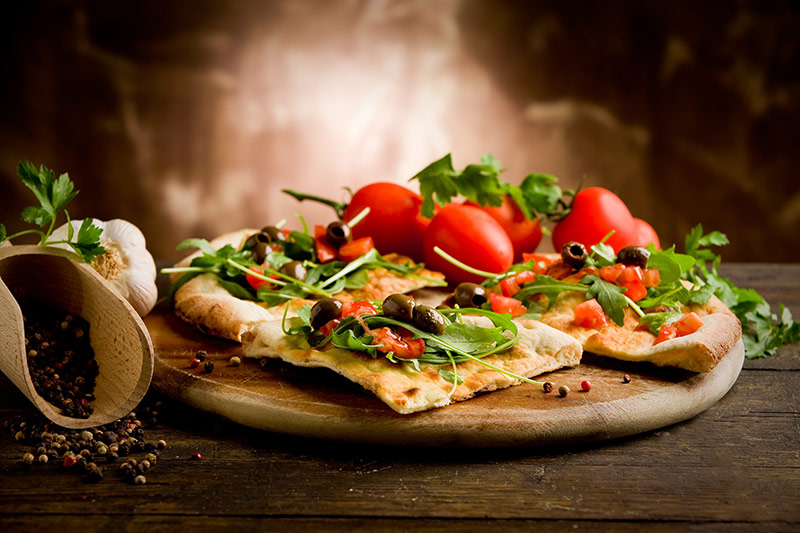 Chilean merquén, one of our favorite seasonings, is made from sun-dried chiles that are smoked and ground, then blended with other ingredients such as toasted cumin and salt. Professional chefs are just beginning to discover it! Find merquén at amazon.com.

Place a rack in the top third of the oven; preheat to 450°F. Whisk the chickpea flour, 2 tablespoons of olive oil, 1 teaspoon of salt, and 1 cup water in a medium bowl or large measuring cup until combined. Let sit at least 10 minutes and up to 1 hour to let the flour hydrate.

Heat 2 tablespoons olive oil in a 12-inch cast-iron skillet over medium-high heat until shimmering. Pour in exactly half (3/4 cup) of the chickpea batter and tilt to evenly coat the skillet. Transfer to the oven and bake the flatbread until the edges are golden brown, 8 to 10 minutes. Using a large spatula, transfer the flatbread to a wire rack. Repeat with the remaining batter.

Meanwhile, cook the tomatoes, garlic, 1/4 cup of olive oil, and the remaining 1/2 teaspoon salt in a large skillet over medium-high heat, stirring occasionally, until the whole tomatoes begin to burst, 4 to 5 minutes. Stir in the chickpeas, oregano, vinegar, and merquén (if using). Reduce the heat to medium and continue to cook, stirring often, until the tomatoes have formed a fully chunky sauce, 3 to 4 minutes. Remove from the heat and stir in the butter.

Slice the flatbreads in half. Serve with the tomato-chickpea mixture, cheese, greens, and lemon wedges alongside for squeezing and olive oil for drizzling.

Note: The liquid from drained chickpeas is called aquafaba, and is used by many vegans and vegetarians to lighten baked goods or make egg-free meringues.